All Hopped up and Ready To Go 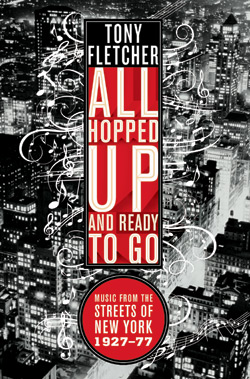 A penetrating and entertaining exploration of New York’s music scene from Cubop through folk, punk, and hip-hop.

From Tony Fletcher, the acclaimed biographer of Keith Moon, comes an incisive history of New York’s seminal music scenes and their vast contributions to our culture. Fletcher paints a vibrant picture of mid-twentieth-century New York and the ways in which its indigenous art, theater, literature, and political movements converged to create such unique music.

With great attention to the colorful characters behind the sounds, from trumpet player Dizzy Gillespie to Tito Puente, Bob Dylan, and the Ramones, he takes us through bebop, the Latin music scene, the folk revival, glitter music, disco, punk, and hip-hop as they emerged from the neighborhood streets of Harlem, the East and West Village, Brooklyn, the Bronx, and Queens. All the while, Fletcher goes well beyond the history of the music to explain just what it was about these distinctive New York sounds that took the entire nation by storm.

“It will be hard for any writer to trump this magnificent achievement.” Record Collector

“The joy here is the manner in which Fletcher unites everything into one vibrantly flowing discourse that affords equal respect for all genres, cultures and artists.” Metro

“Fletcher’s narrative hurtles along like a high-speed cab ride down Broadway.” Mojo

“Anyone interested in popular music and the rich cultural heritage of New York—indeed, of all of the U.S.—should read this book.” Booklist

“An indispensable reference book for college students and a survival guide for modern musicians.” Chronogram

“(a) richly detailed study of fifty years of the city’s most important musical history.” Publishers Weekly

All Hopped Up and Ready To Go at WW Norton, publishers.

All Hopped Up and Ready To Go at iJamming!

All Hopped Up and Ready To Go on YouTube