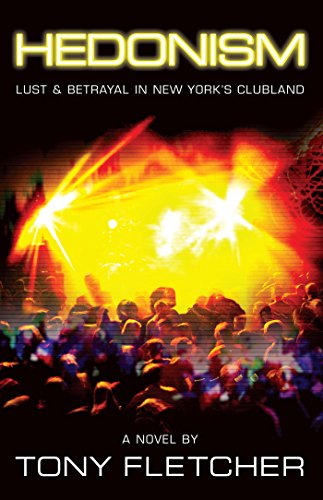 New York, the early 1990s. In a city that has spiraled out of control, megaclub Hedonism attracts the abandoned and the abused, kids who flock to Manhattan to invent themselves anew. When DJ Skippy, the club’s rising star, is shot in mysterious circumstances, his best friend Holy decides to solve the crime himself.

Hedonism is a fast action trip through a hard core underworld of pounding dance music, S&M sex and mountains of illegal drugs. It’s a world populated by glamorous models, body-pierced dancers and heartless villains, a world where no-one sleeps and everyone is a suspect.

“An impressive thriller…(A) scarily accurate portrayal of club people in all their gore and glory.”
Matthew Duffield, DJ

“Captures, vividly, a hedonistic scene that is by turns beautiful and downright fucked-up…The biggest night out that you’ll ever have in.” Ruth Saxelby, Jockey Slut

“An impressive accomplishment. Fletcher elucidates a time and place in NYC’s clubbing world – the still-debauched, pre-Guiliani Limelight of the early ’90s – with a you are there exactness that could only come from experience. ”
Bruce Tantum, Time Out New York

“A portrayal of Dionysian excess with a contemporary twist… Fletcher’s prose is good and the deconstruction of DJ scenes, love and art is engaging.”
Ali MacQueen, Record Collector

“Part thriller, part black comedy, part voyeuristic excursion into the seedy realms of S&M sex and heavy drug use, Hedonism will have you gripped from start to finish, guaranteed.”
Russell Deeks, International DJ

“Tony Fletcher’s descriptions of the intertwined strands of culture and sound that led to electronica are worth the price of admission.”
Douglas Rushkoff. Bull, Ecstasy Club

“A whirlwind tour of New York City as the guide books never intended. For those who like their sex and drugs with plenty of droll.”
Jemma Kennedy, Skywalking

“Blew me away. A gripping tale of the New York underground club scene and the fascinating characters that operate therein. It’s funny, outrageous, gritty but without pretention.”
Piper Terrett, Bedroom DJ